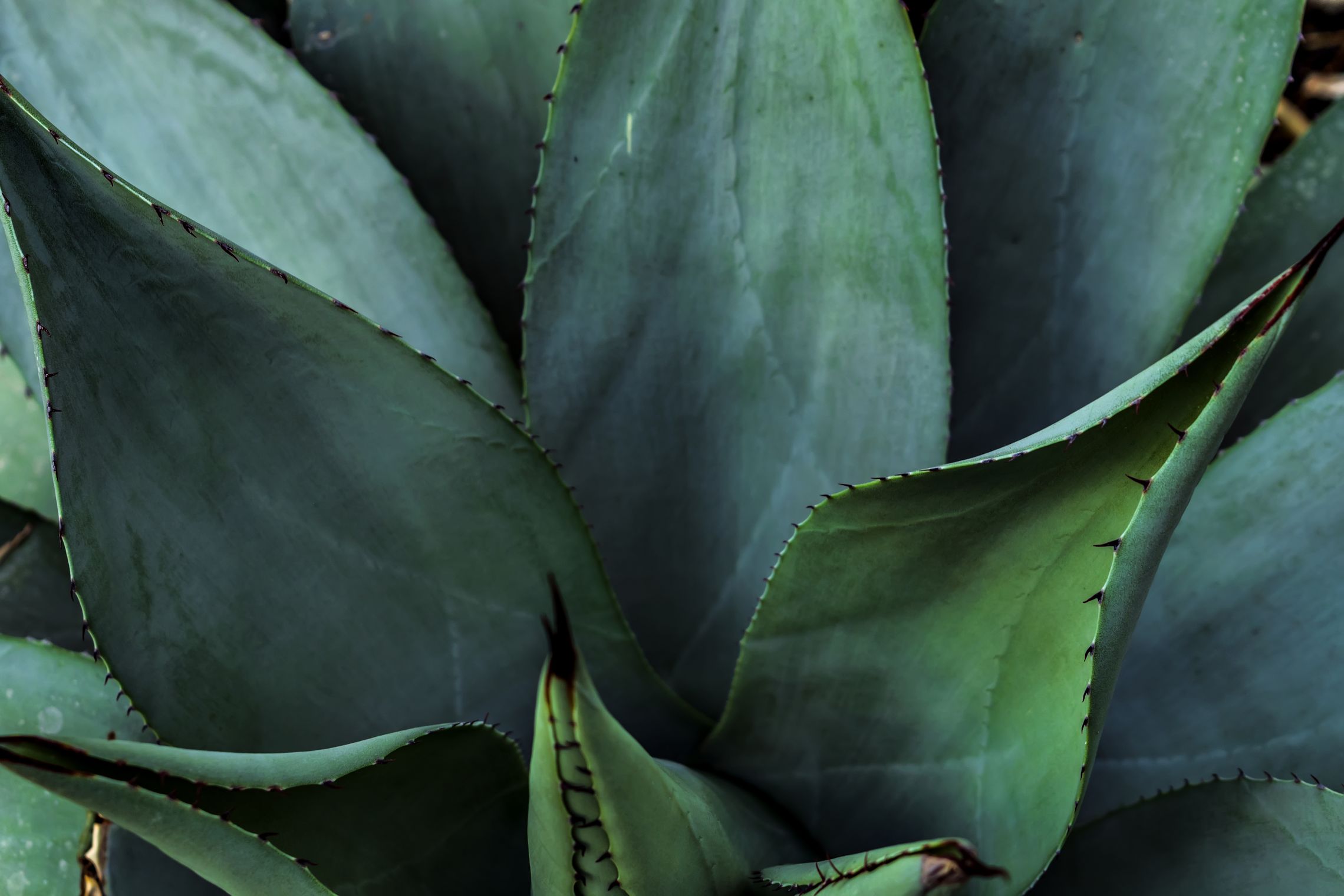 The word “agave” appears just about everywhere these days. People use it as an alternative sweetener, see it on the ingredients list for liquors like tequila and Mezcal, and notice that it’s made the lists of foods that are low on the glycemic index. But what exactly is agave? Does it come from a plant? Where does it grow? What can you do with it? Well, hold on to your (cocktail) glasses because we’re going to clear up the mysteries of this desert-loving plant once and for al

The blue agave plant, named after its spears, which protrude from the base and stem of the plant and have a blue-green color, is native to the dry, arid climates of Mexico, the Caribbean, and the desert areas of the United States.

The blue agave plant can reach a height of eight feet, and its spears have prickly spines on the ends. Like most other desert plants, blue agave doesn’t need much water or fertilizer, although it doesn’t tolerate cold weather well and must be kept at temperatures no lower than 50 degrees Fahrenheit.

What makes the blue agave plant different from all of the others? For the record, there are literally dozens of different kinds of agave, from Caribbean agave to Octopus agave.

If you were to look at all of the agave plants side by side, you’d notice that they’re all different. The spears all have different configurations, from bulbous and puffy to curved and rounded.

The spears on a blue agave plant are a distinctive pale blue-green color, and they grow very slowly, taking years to reach their final forms. Other agave plants grow at different rates, some faster than others.

All agave plants belong to the same kingdom, order, genus, and more when classified scientifically. The only difference lies in the species; where most types of agave are salmiana, blue agave is tequilana. This word is an important clue since blue agave is used to make tequila and Mezcal, among other things, while standard agave is not.

How Are Blue Agave Plants Used?

Although blue agave plants are used to make both tequila and Mezcal Rosaluna, there are plenty of other things that can be made from them as well. The processed agave can be made into a sweetener, a good baking substitution, a syrup, and more.

It all depends on how the plant is processed once it's harvested. Curious about what you can use blue agave for? Here are some of the most common products made from this amazing plant.

Agave makes a great sweetener if you’re trying to avoid refined sugar. It’s not only vegan (unlike honey, the other natural alternative sweetener), but it’s also better for you than the chemical-filled sugar substitutes on the market.

You can stir some agave into your tea, pour it into your morning smoothie, or even add it to some delicious cocktails. Yum. :)

For those who need to watch their sugar levels, blue agave is low on the glycemic index, meaning that it won’t affect your blood sugar levels like other sweeteners do. This makes it a great alternative for people with diabetes and other conditions who still love baked goods.

Choosing to use agave in a recipe instead of sugar requires some careful measurements, as agave is usually sold in syrup form, and most recipes call for standard, non-syrup sugar. However, it can be done, leaving you to enjoy your healthier-for-you baked goods.

Most of the time, blue agave is turned into a syrup that you can use for anything from sweetening beverages to serving pancakes.

Agave syrup is both gluten-free and vegan and makes a great sugar substitute that’s healthier than refined white sugar and other chemical-filled sugar alternatives.

Mezcal is one of the best-known uses for the blue agave plant. The liquor is made from the core of the plant, which is cooked and then allowed to ferment before it’s strained and bottled. Tequila is made in a similar way, though we have a clear preference (can you blame us?).

Both drinks are vegan and gluten-free, especially Mezcal Rosaluna, making it a prime option to include in cocktails of all kinds.

Whether you saw blue agave on the ingredients list for Mezcal Rosaluna and wanted to know more about the plant or were wondering what else you can do with agave, we hope we’ve cleared up that mystery for you.

So, use your blue agave however you choose—the possibilities are endless!

Agave: Is It Good For You? Health Benefits, Nutrition Information, Alternatives, and More | WebMD

How to Find the Best Mezcal