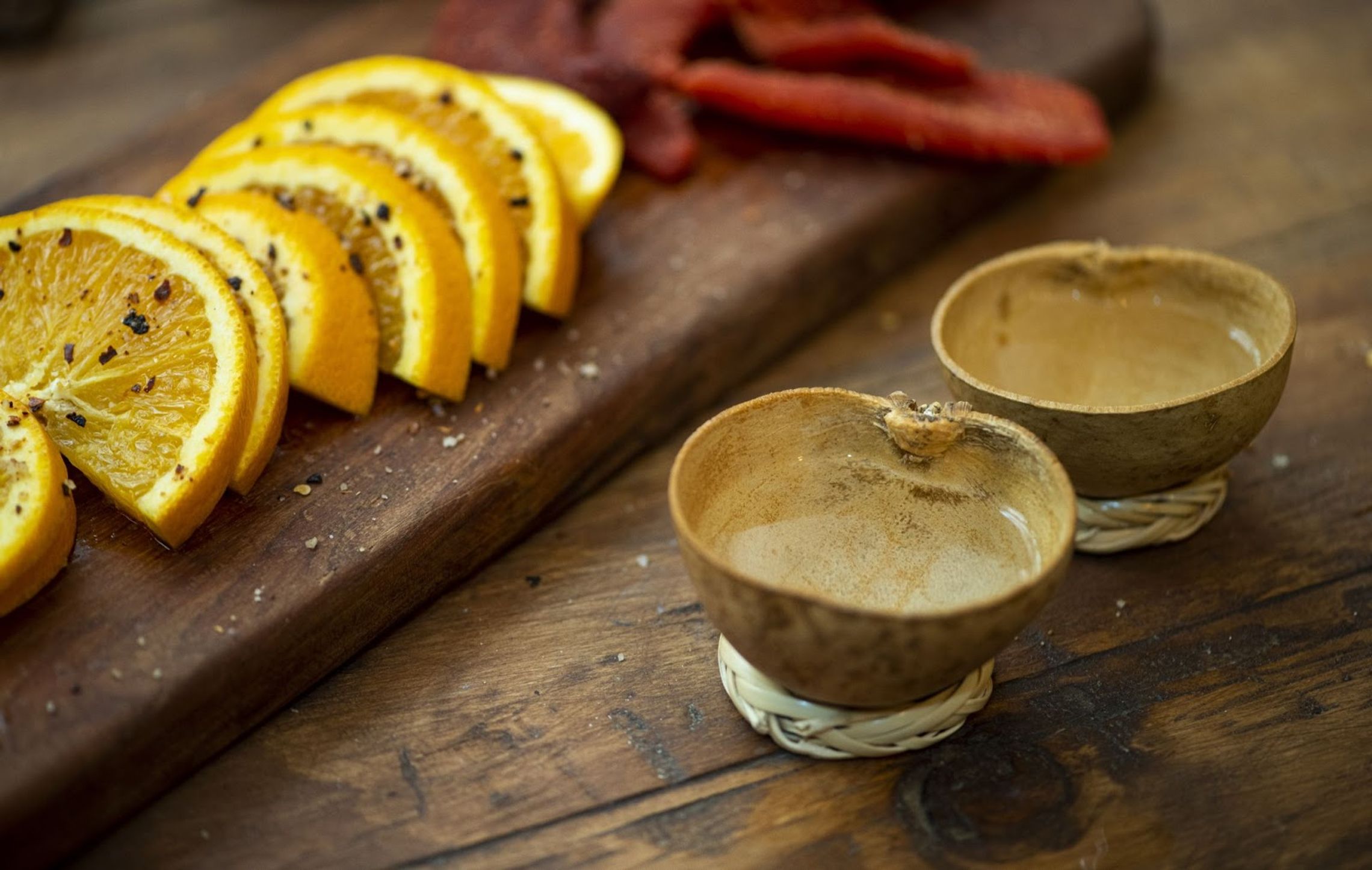 The Old Fashioned as we know it has been going in and out of fashion ever since its creation in the early 19th century. Each resurgence of this good ole’ cocktail seems to come with some kind of new twist, addition, or substitution—we can’t wait to tell you what’s in store this time around.

But first, before we make any changes, let’s reach a consensus on what an “Old Fashioned” really is.

If you pop “Old Fashioned cocktail” into handy-dandy Google, you’ll see that this classic beverage is made of bitters and water muddled with sugar, and can be paired with either whiskey or brandy. It’s always topped with an orange slice and maraschino cherry, too.

Fun fact: the Old Fashioned is traditionally served in an old-fashioned glass (AKA rocks glass), which actually predates the “cocktail” as we know it. If you get “old and wise” vibes from the Old Fashioned, you’re not wrong; it’s likely the grandfather of some of your favorite drinks. We’ll always respect tradition, but we also believe that variety is the spice of life—so let’s make some new traditions.

The state of Oaxaca (wah-hah-kah) is a magical place filled with cultural history, traditional cuisine, and beautifully diverse natural riches. Front and center in the middle of this state lies colonial Oaxaca city, a central hub loved by locals and tourists alike.

So, what does a city in Mexico have to do with an Old Fashioned cocktail, you ask? Well, this isn’t your average state; Oaxaca knows a thing or two about its liquor. In fact, Oaxaca is the Mezcal Capital of the World. And of course, more generally, all of the world’s tequila comes from Mexico. So does the majority of Mezcal.

Yes, we know there are “tequilas” and “Mezcals” from other places, but they aren’t the real deal. Tequila, by definition, must be produced in Mexico the same way that Scotch must be made in Scotland and Champagne must be made in Champagne. Similarly, Mezcal is recognized as a Denomination of Origin (DO): “a special kind of geographical indication generally consisting of a geographical name or a traditional designation used on products which have a specific quality or characteristics that are essentially due to the geographical environment in which they are produced.”

Mezcal is a spirit distilled from an agave (maguey) plant. It gets its name from the Nahuatl word “mexicalli,” which translates to “oven-cooked agave.” Agave carries with it the characteristics of the terroir it is grown in, just like wine varietals. Agave from different regions will bring a unique flavor profile, distinct only to the environment it was grown in. The soil, how the agaves were cared for, and the distillation process will also affect the final flavor. Oaxaca earned its title of The World Capital of Mezcal by giving us the tastiest and best agave out there.

Mezcal Rosaluna is made in the beautiful hills of Oaxaca on a family farm nestled between two towering mountains. Our spirit has been hand-crafted and perfected over six generations.

It all starts with planting baby agaves and nurturing them with water and sun (and love!) for up to eight years. The agaves are then slow-roasted in an underground pit oven surrounded by pinewood logs and stones. After the agaves have cooked and are at their peak sweetness, they’re milled or mashed to extract the juice and fiber. Then it's onto fermentation, where we start building alcohols—it can take up to eight days, but it’s oh so worth it. Finally, our double distillation process separates the water from the alcohol and captures the alcohol into the final spirit of Mezcal Rosaluna. All done.

So, why Oaxaca? Because it’s “old and wise,” just like the classic Old Fashioned. They’re already on the same wavelength. An Oaxaca Old Fashioned collaboration was just meant to be.

What makes an Oaxaca Old Fashioned any different?

Let’s recall the traditional recipe. It goes something like: whiskey or brandy, on top of muddled sugar and bitters, often with some additional sweetener and water, and always garnished with an orange slice or cocktail cherry.

In today’s recipe, we will be using Mezcal and tequila instead of whiskey or brandy and agave nectar as a sweetener.

The concept of the classic Old Fashioned is the perfect cocktail to showcase the unique complexities of Mezcal. Mezcal Rosaluna's flavor profiles of earthy agave, a complex aroma, and a smooth finish exist harmoniously with the subtly sweet bitterness of the rest of the drink. By also incorporating tequila, we get a wonderfully fresh feeling with every sip.

We love using agave nectar because it’s a more natural alternative to table sugar and brings an element of synergy with the tequila and Mezcal. Match made in heaven vibes.

The Moment You’ve Been Waiting for: The Recipe

As you may notice, this drink contains three times the tequila as it does the Mezcal. This recipe is a bit of a “toe-dip” for those who aren’t quite familiar with—or perhaps even intimidated by—our beloved Mezcal. Many people know Mezcal as tequila’s “hot and smoky cousin,” but it’s so much more than that. But hey—we get that new things can be a little intimidating. So for the Mezcal newbies out there, this one’s for you. Introducing: your new favorite spirit.

Wait, hold up: regarding the flamed orange peel... It’s one of those things that seems pretty straightforward yet somehow still goes wrong half of the time. We’re not saying you can’t manage on your own, but here are some tips—just in case.

Since we’re already going all-in with this drink’s dramatic decor (anything that’s flamed feels dramatic, right?), we’re also recommending this drink be served in a classic rocks glass. Cocktails don’t have designated serving glasses for nothing, you know. Each type of cocktail glass is specifically designed to enhance the drinking experience. Aside from your bartending skills, the kind of glass your drink is served in can enrich its aroma, temperature, color, and flavor.

Rocks, lowball, and old-fashioned are the different names this type of tumbler glass goes by. These short, wide glasses with wide mouths allow for bigger ice cubes (or even one large single), which is important because they will melt more slowly and deter the drink’s dilution. The bottom of the glass is thick and heavy, allowing for proper muddling without the worry of shattering the glass. It’s last notable feature is its low center of gravity, making it harder to knock over when you get to your third or fourth round. Very, very important.

And there you have it. An old favorite with a new twist.

Make a Classic Your Own with the Magic of Mezcal

Finding something on the cocktail menu with Mezcal in it used to be a rarity, but we’re so happy to see that the times are changing. Mezcal cocktails are becoming increasingly common on bar menus, and it’s awesome. LFG.

Our Oaxaca Old Fashioned is just what you need when you’re in the mood for something rich, sophisticated, and luxuriant. We know this recipe only calls for 0.5 oz of Mezcal, but with our Mezcal Rosaluna, it’s all you need. Roasted agave hearts and their delicious caramel notes lead the way while spices like ginger and cinnamon are woven throughout. Rosaluna’s bright and brilliant citrus notes are the perfect complement to this drink's beloved flamed orange peel garnish. Lastly, leading with a hint of agave smoke, our Oaxaca Old Fashioned has a smooth finish and feels like a big, warm hug.

With the perfect changes and substitutions to an all-time favorite cocktail, we know our Oaxaca Old Fashioned will be staying in fashion for years to come.

The History of the Old Fashioned Cocktail | Vine Pair

Single-Estate Farms: What Does It Mean to Be Vertically Integrated?

Pechuga: What Is It & Why Does It Matter?

A Guide to Drinking Vegan