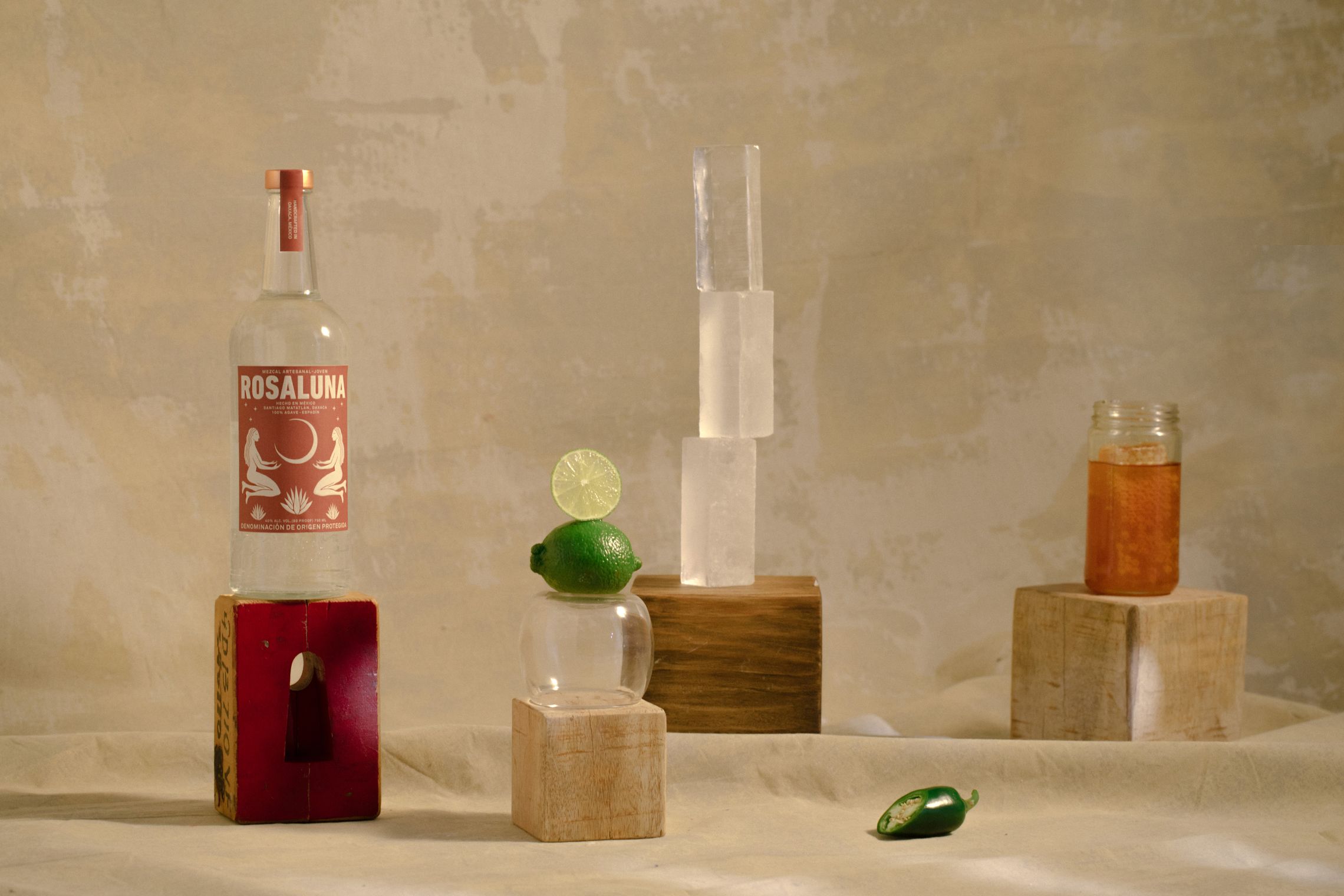 Hey, we get it. Things can get confusing. That’s why we’re here to help you learn more about Mezcal. We’ve been obsessed with it for years and can break it down pretty easily—Mezcal is a distilled spirit made from the heart of the agave (maguey) plant and varieties of agave. People always say it’s tequila's smoky cousin, but it’s so much more than that. Speaking of, before we jump into what makes the spirit so magical (and trust us, there are a whole host of reasons), let’s talk about the difference between Mezcal and tequila.

Mezcal vs. Tequila: What’s the Deal?

The two spirits often get confused, and while they do have similarities, they’re also pretty distinct. Here’s a cheat sheet: Tequila is actually a type of Mezcal. It’s usually made industrially, while Mezcal is often handcrafted using Mexican traditions that have been passed down for centuries. Tequila is always made from blue agave, while Mezcal can be made from up to 30 some varieties of agave, although espadín is the most common (there are nearly 200 agave species in total). Tequila is produced only in the western state of Jalisco and small parts of four other states. Mezcal is made primarily in Oaxaca, the southwestern part of Mexico. To make tequila, agaves are cooked in above-ground ovens, whereas with Mezcal, they’re roasted in underground pits in small-scale production houses called palenques. And as far as alcohol content goes, both spirits can reach up to 55%. All the more reason to savor every sip. Want to know more (or just want to impress your friends at happy hour)? We wrote a whole post on the topic here.

Mezcal is a complex spirit. It has smokiness, sweetness, and all types of notes that make you want more. From species of agaves and types of agaves like blue agave, arroqueno, tepeztate, and tobalá, to different ages like joven blanco, reposado, and añejo, you can get the smoky flavor from so many plants and places. The soil used to grow agave plants also plays a part in how each Mezcal tastes, but more on that later. And if you want to make a margarita with the best Mezcal of all time (ok, we're biased), click here.

Ok, so What Is Mezcal?

Mezcal is a spirit distilled from an agave (maguey) plant. It gets its name from the Nahuatl word “mexicalli,” which translates to "oven-cooked agave.” This term refers to the production of Mezcal. Much like many other spirits and wines, to qualify as Mezcal, it can only be produced in one of nine different areas of Mexico: Durango, Guanajuato, Guerrero, San Luis Potosi, Tamaulipas, Zacatecas, Michoacán, Puebla, and Oaxaca. Still, some Mezcal producers and distillers explore types of agave throughout other regions like Jalisco.

Rosaluna is made in the beautiful rolling hills of Oaxaca, in the town of Santiago Matatlán, lovingly referred to as “The Capital of Mezcal.” It’s handmade by a sister and brother duo whose family has been lovingly creating the spirit for over six generations.

There is always something new to learn about the unique Mezcal-making process, from cooking with copper pots to so many other beautiful Mexican traditions. In case you’re wondering, here’s the step-by-step process of how we make ours:

What sets Mezcal apart has a lot to do with its specific terroir, or the environment in which it’s been cultivated. Before we begin roasting, the standard first step in the Mezcal-making journey, we start with what we call the farming process.

In the first few months of the year, our agaves grow a quiote, a tall stalk that springs up from the middle of the plant. As it grows, bright green flowers start to blossom all over the quiote, and soon, it’s time for pollination. Hummingbirds, bees, and even bats help pollinate the plant, producing seeds that will then become baby agaves. We say goodbye to the mother agave (the plant dies once it’s flowered and nurtured all the baby agaves) and hello to all the new life that it’s given us. Once the babies bloom, it takes 2-3 years before we can plant them in the field, and then 7-8 years until we can harvest them.

The agaves follow Mother Nature’s lead—the ripening process is a slow and steady one, and it’s just one reason why Rosaluna, for us, is a reminder to slow down, soften, and surrender to the moment. If there’s one thing Mezcal teaches us, it’s that the best things simply can’t be rushed. As the agaves are growing, we constantly clean them by hand, nurture them with water and sun, and maintain fresh soil. The soil in Santiago Matatlán gives special characteristics to agaves, and it also gives our Mezcal the distinct earthy notes we love.

When the baby agaves have matured into full agave plants, we select the ones we want to harvest. Since we’re a single-family operation, we can take the time to choose only the best agaves for our Mezcal. We look for the oldest and largest plants that have the highest sugar concentration, and then we cut the leaves (pencas), to get to the heart (piña). Piña means pineapple—it’s the sweetest, juiciest part of the plant, and it also closely resembles the yellow fruit. We then load them up and take them to the palenque, where they’ll be roasted and eventually distilled into Rosaluna.

Once the agaves have been harvested, the production process begins as we start a fire with pinewood logs in the ground, cover it with stones and tightly packed dirt, and carefully pile on the agaves. The earth keeps in all the heat, so we can roast the piñas to a perfect crisp. This process adds a distinct note of cooked agave to the Mezcal and takes up to five days.

In this part of the process, we use a mash or a stone mill pulled by a horse to remove all the juices and fiber from the cooked agave plant.

Fermentation is where the magic happens—it’s when we turn the agave juice into alcohol. Using pine wood, we add water to the juice and agave fiber to begin the fermentation process. It can take up to eight days from start to finish. The process is quickest during the warmer seasons, when temperatures are high. During the fermentation process, enzymes and bacteria work to convert sugar into low ABV alcohol (“tepache”).

In our double distillation process, we use horizontal copper and pinewood stills. We begin by mixing the fermented agave juice with the fiber. In the second distillation, we take the head and heart of the first distillation and distill it again. This process separates the water from the alcohol and captures the alcohol into the final spirit of Rosaluna.

Harvesting wild agaves as opposed to cultivating them responsibly, through family-owned farms, poses a huge threat to the environment. We’re seeing more and more mountains depleted of natural vegetation as growers cultivate their plants on the hillsides, wiping out local flora and fauna and significantly eroding the soil. When we set out to make our own Mezcal, we knew we wanted to support sustainable farming, not contribute to deforestation. Our spirit is made from a domesticated agave species called Agave angustifolia (espadín), which we grow in the same valleys where it’s been harvested for a long time. You could say we’re big on tradition. Some other ways we keep things sustainable: We rest the field for 1-2 years after harvesting the agaves to allow the soil to restore itself, we use natural pollination, we reuse the fibers and the fermented water from our Mezcal-making process as fertilizer for our agave plantations, and we don’t use electricity for cultivation or production.

Now that you know a lot more about Mezcal, we hope you’ll be inspired to try some of our favorite recipes! If you want to test your knowledge on everything you’ve learned, take our pop quiz below, and if you want to dive even deeper, you can check out Mezschool—our guide to all things Mezcal.

How well do you know Mezcal?

1. Name the town lovingly referred to as “The Capital of Mezcal.”

2. What tasty fruit does the heart of an agave plant resemble?

3. How many years does it take for an agave plant to mature?

4. About how many agave species are used to make Mezcal?

5. What specific type of agave do we use for Rosaluna?

6. What do we look for when we select agaves for harvesting?

A. The biggest ones
B. The oldest ones
C. The sweetest ones
D. All of the above