WTF Is a Mezcal Worm and Why Is It at the Bottom of My Glass? 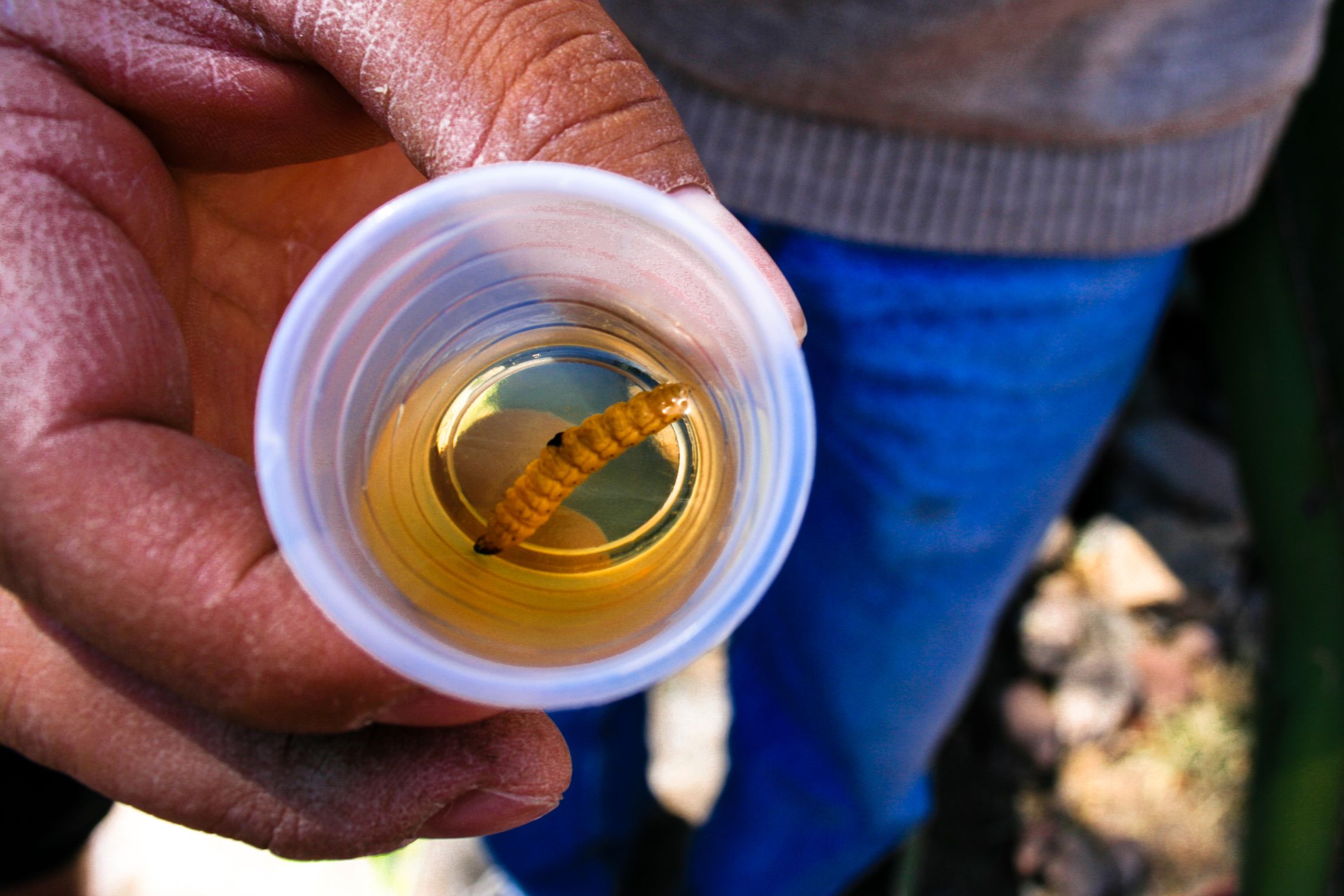 The worm at Mezcal’s bottom is what myths and legends are made of. What’s with the larva lurking at the bottom of the bottle? Enquiring minds want to know.

Even children who don’t understand what Mezcal is know about the worm found at the bottom of its bottle. Cartoons depict the drunk little crawler creeping up to the lip of the bottle, glassy-eyed and hiccupping. We’ve seen it all before.

Yes, when it comes to Mezcal, the worm at the bottom of the bottle has grown beyond a cultural phenomenon and into a world-renowned icon of sorts. They are two things that will be forever associated together. The worm is the peanut butter to the Mezcal’s jelly.

But what is really going on with that worm on the bottle’s ground floor? How did he get there? Why is he still there? Is it all just a gimmick? Or is there more to this party trick? We’re on the case—let’s get to the bottom of it.

The Early Bird Gets the...Larva?

First of all, we hate to burst your bubble, but the little dude in the Mezcal bottle isn’t a worm at all. He is actually the larva from a moth found on the agave plant, one of the spirit’s main ingredients. Dispelling the myth that the worm is not a worm at all is just the first of many shocking discoveries surrounding this whole “worm in the bottle” thing.

Blast from the Past

There is truly a myriad of myths surrounding the notorious little worm in the bottom of the bottle. You may want to sit down for this, because the following tidbit of info we’re sending your way might just knock the taste buds right out of your mouth.

So, legend has it that Senior Jacobo Lozano Paez, Mezcal maker extraordinaire, was sipping on his own supply when he decided that the larvae, once placed in the Mezcal, somehow made the drink taste better.

Look, we’ve got nothing against bugs—there are tons of delicacies that include these creepy crawlers, and we’ve enjoyed a few of them ourselves. That said...

It’s just not true! Fact has yet to back that theory, and Paez hasn’t provided us with a whole lot more.

A Little Bit of Luck

One thing about Mezcal that is impossible to deny is its rich tapestry of history that goes as far back as the 20th century BC. Tied to the powerful images that Mezcal brings to mind, the worm was thought to bring luck and strength to whoever was “fortunate” enough to find the little sucker swimming in the bottom of their glass.

Trying to Show Off

Legend also has it that Mezcal is so potent that it...pickles? If a Mezcal has high enough alcohol content, it’s said to be able to pickle the larvae at the bottom of its bottle. This means that the little worm wouldn’t rot, and would therefore cause no issue to your bottle of Mezcal. Unfortunately… Science doesn’t back up this theory. Another worm legend gone wrong.

Back in the olden days, when people couldn’t tell the difference between Mezcal and tequila (it’s obvious, y’all), the worm was used to distinguish the two. Because Mezcal was the one with the worm, Mezcal connoisseurs really leaned into it being an important factorThe differences between the two become apparent with your first sip. All tequilas are Mezcal, but not all Mezcals are tequila—we’re a little more unique. And we don’t need a worm to tell you that!

All You Can Eat

If there is a worm at the bottom of your Mezcal bottle (don’t worry, you’ll never find one in Rosa)—you may be wondering…. Can I eat it? The answer is yes! Though the thought of downing the worm might be enough to make your stomach churn, you will not get physically ill from the little guy. So if you’re feeling adventurous, we say go for it! It’s good luck, after all!

Lucy in the Sky con Gusano

And here comes the biggest heartbreaker of them all, folks... That little rumor that Mezcal worms make you hallucinate if you swallow them? Yeah, well, as you may have guessed by now, that one’s made up too.

There are no hallucinogenic properties to be found in Mezcal worms, even after they have spent some time fermenting in the bottle. But no fear—you have an entire bottle of Mezcal to make you feel some type of way. With less of a hangover too.

Does Mezcal Actually Need a Worm?

Absolutely not! Ever since its inception in the ‘50s, the worm in Mezcal has been used as a marketing ploy (and a really good one at that). Our Rosaluna, rooted in tradition but elevated with modern notes and flavors, is worm-free. We let her speak for herself.

While you will not find a worm in Mezcal Rosaluna, you WILL find the world’s finest Mezcal, made out of only the very best ingredients. The only thing you’ll find at the bottom of our bottles is a whole lot of love and pride for the product we’ve created for generations. And that’s something to raise a worm-free glass to!

What Are the Effects of Drinking a Worm From a Tequila Bottle? | leaf.tv

What’s The Real Story Behind the Worm in the Tequila Bottle? | Edible Insects

What Is a Tahona?