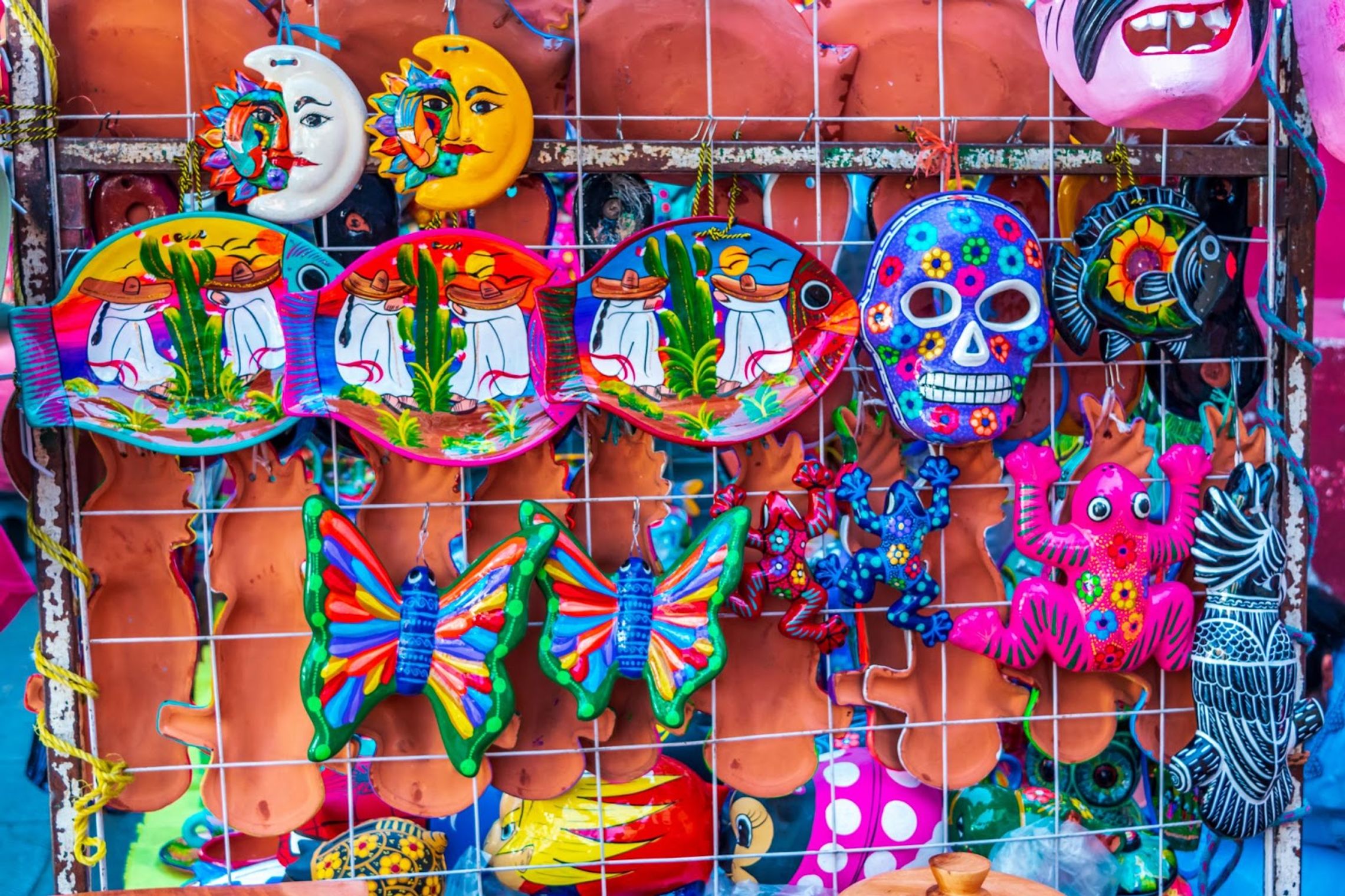 Oaxaca, pronounced waa-haa-kuh, is the perfect canvas for creation, connection, and reflection. It’s also the best place for drinking and eating.

Oaxaca is a state located in southern Mexico. When people think of “Mexico,” they might first think of popular vacation destinations, like Cancun or Mexico City. For reference, Oaxaca is a two-hour flight from Cancun and an hour and fifteen-minute flight from Mexico City.

The state is famous for its capital city, Oaxaca de Juárez, but there are tons of smaller places to check out, like Huatulco, a town near the coast with a famous Pre-Hispanic ball court and stone temple, or Santa Maria del Tule, where the stoutest tree trunk in the world sits.

Why Is Oaxaca an Incredible Place to Visit?

Well, because it's the most amazing combination of culture, history, natural riches, colonial architecture, beaches, wildlife, and so much more. Plus, Oaxaca is an incredibly diverse region—while Spanish is mainly spoken in the city, there are small communities all over the state that still speak languages like Mixtec.

Ok, but seriously, Oaxaca is incredibly underrated. Oaxaca is one of those special places with a little taste of everything. Do you know how sometimes we have to make trade-offs between “beach-like” vacations and “get-to-know-the-city” vacations? Yeah so…. Oaxaca doesn’t make you choose.

Surfers can hit the Pacific coast at Playa Zipolite and then return to the city center to explore to their heart's content. Visit the church of Santo Domingo in the capital city, or learn about Oaxaca and wander through the Zócalo square, which is always buzzing with activity. Just don't forget your pesos, because you’ll definitely want to purchase some of the delicious street food you’re sure to encounter.

Known for its delicious street food, colorful architecture, bustling markets, and more, Oaxaca City is the perfect blend of traditional and modern influences. All while maintaining its authenticity and specialness—sounds pretty great, right? We’re just getting started.

If you're looking for day trips away from the City Centro, there's plenty to hold your interest as well. The state of Oaxaca is also home to Monte Albán, a famous archaeological site and UNESCO World Heritage site that was an important cultural center for the Zapotec people. You can get out of the bustling city of Oaxaca and visit Benito Benito Juárez, a small mountain community in the Sierra Norte known for its gorgeous scenery and outdoor adventures. There's also Hierve el Agua, a massive waterfall, Mitla, an ancient religious center, and Puerto Escondido, a gorgeous resort town.

What Food Is Oaxaca Known For?

Oaxaca is known for so many incredible dishes—we’re getting peckish just thinking about them.

If you're looking for the ultimate foodie experience, hit up Mercado 20 de Noviembre or the Benito Juarez Market. Or better yet, plan your visit to coincide with the Guelaguetza festival so that you can really experience some out of this world food.

The gastronomy of Oaxaca features profiles of roasted, rich, and layered savory flavors. Meats, cheeses, and chocolate make frequent and perhaps even surprising appearances in more dishes than one might think. They even invented a particular kind of cheese there called quesillo which is frequently used in quesadillas, and grasshoppers are served as a snack (it's a lot better than it sounds, promise). Here’s our list of ten foods Oaxaca is most well-known for, in no particular order.

Tlayudas can be served open-faced (like “normal” pizza) or folded in half (like a calzone) when it’s cooked on a charcoal grill. Oaxacan pizza is no joke; this dish is often enough to feed two people and will leave both of you more than satisfied in all the best ways.

We’re talking about Mexico here, remember? Obviously, tacos have to be at the top of the list.

Huitlacoche, which is a type of fungus, goes by a few names: corn mushroom, corn fungus, and corn truffles, to name a few. Whatever you choose to call it, this fungus is considered a delicacy and has been consumed in Mexico dating back to before the Spaniards arrived. North of the border, Huitlacoche is now produced in California or Florida, too.

The taste of Huitlacoche is similar to a standard mushroom flavor and appropriately has a light, corn-like sweetness to it. Oh—we forgot to mention, huitlacoche is technically a plant disease that grows on ears of corn. Anyhoo... after being lightly sauteed in oil and spices, these mushrooms bring an earthy, squishy texture to tacos (as well as some absolutely dank juiciness).

Huitlacoche tacos are a simple dish, usually consisting of the huitlacoche, sauteed onion, chopped garlic, and very little else. Like we always say, there is beauty in simplicity.

This dish got its start through the tradition of dipping stale tortilla chips into leftover frijoles (a mashed bean dish). Over time, enfrijoladas evolved into a breakfast staple made from beans, meat, and cheese wrapped up in a tortilla and served with extra bean sauce.

In Oaxaca, enfrijoladas signify abundance and good fortune because having the required ingredients is a sign you’re comfortable and doing well in life. The particular Oaxacan method is stewing the beans with leaves of local avocado plants—some locals even claim it isn’t real enfrijoladas without them.

Memelas, also known as memelitas, are fried cakes made of masa and topped with fresh ingredients like cheese, tomatoes, and cilantro.

Memelas are usually a bit thicker than regular corn tortillas as well as longer and more oval-shaped. This dish is another taco-like-variation, but smaller in size and considered a snack food rather than a main course.

Tetelas are yet another twist on tacos, somewhat similar to a good ole calzone. Tetelas are stuffed corn tortillas folded into perfect little triangles.

Tetelas are another great breakfast option because their triangle shape allows them to be wrapped up and taken on the go. There are no set ingredients for tetela fillings, but you can never go wrong with beans, cheese, meat, and (lots of) sauce.

Oaxaca does tamales in its own unique way. And clearly, the Oaxacan version is (unsurprisingly) pretty great, because it has its own nickname and category in the tamale world.

Oaxacan tamales feature chicken, masa, lard, tomatoes, and other ingredients to taste, all wrapped up in banana leaves. Unlike triangular tetelas, these tamales are square-shaped. The secret and star ingredient in tamales oxaqueños is Mole Negro, a traditional Mexican marinade. Mole Negro is said to be the darkest, silkiest, and most flavorful sauce in all of Mexico.

To make it simple, tamales oxaqueños are banana leaf-wrapped tamales with a very special secret sauce. But seriously, that’s the understatement of the century—these tamales are drool-worthy and absolutely worth a try (or two or three!).

Perf, those tamales oxaqueñes just gave us the perfect segue into mole (or moles, we should say).

The term mole refers to a Mexican style of sauce made from roasted ingredients that are ground together and then slow-simmered. Supposedly there are hundreds of mole variations, which honestly isn’t hard to believe when we start day-dreaming about all of our favorite spices, seasonings, and possible additions. Oaxaca is associated with seven types of mole in particular: Poblano, Verde, Negro, Chichilo, Amarillo, Coloradito, and Manchamantel.

Mole Negro is the most famous Oaxacan mole, and it’s no coincidence this mole is Tamales Oxaqueñes’ star ingredient (maybe even its claim to fame). Mole Negro consists of various dried chiles that have soaked in water before being blended with chocolate and breadcrumbs—definitely not your average sauce.

What Drink Is Oaxaca Known For?

Recall: Mezcal is a distilled spirit made from agave plants. Mezcal gets its name from the Nahuatl word “mexicalli,” which translates to “oven-cooked agave.” This term refers to the spirit’s production process; agave hearts are slow-roasted in above or below ground ovens to get them all mushy and ready to be “juiced.” Much like other spirits and wines, to qualify as Mezcal, it can only be produced in specific areas of Mexico.

Oaxaca is one of the nine Mexican regions certified to produce Mezcal. What sets a great Mezcal apart has a lot to do with its specific terroir or the environment in which it’s been cultivated. Agave carries the distinct characteristics of where it was grown, which impacts the taste of the final spirit. The consensus is Oaxaca produces the best agave, therefore also giving us the best Mezcal. *chefs kiss*

Why Is Mezcal So Important in Oaxaca?

Mezcal is so much more than just another liquor to toss back at the bar. In Oaxaca, Mezcal carries deep historical and cultural significance.

Given Oaxaca is the place for making Mezcal, many families in small towns are heavily involved in its production. Several family-run businesses across the state have been making Mezcal for generations. Unlike tequila, which is typically produced on an industrial scale, Mezcal is traditionally made in small-batches with artisanal methods. Mezcal has long been a point of bonding, always sure to bring family, friends, and communities together.

Mezcal also plays an essential role in just about every occasion and celebration; there’s no wrong time for Mezcal. From dinner parties to festivals, to funerals even, Mezcal is the go-to drink of choice. Drinking Mezcal is a magical ritual for any and every occasion.

Looking further back in history, Mezcal was used as a medicinal tool and was praised for its healing properties.

What Is the Spiritual Importance of Mezcal in Oaxaca?

Mezcal is more than just America’s new favorite spirit; it’s spiritual in and of itself.

We know agave carries a unique flavor profile depending on cultivation, but this captures not only the distinct place it hails from, but the period of time, too. Oh, and agaves aren’t grown overnight; rare agave species take upwards of 25 years to reach maturity. This represents years and years of labor-intensive work by small family businesses. It should come as no surprise that with a good Mezcal, you can taste the love in every sip.

Mezcal Rosaluna is made in the heart of beautiful Oaxaca by a brother and sister duo whose family has perfected the craft over six generations. Mezcal Rosaluna is also 100% vertically integrated, meaning the growing, farming, fermenting, and distilling processes all take place on the family farm, nestled between two towering mountains.

Mezcal is more than just a spirit. As Oaxaca knows best, it’s dancing in the moonlight, a hug after a long day, and so much more.

What is Mole Sauce: Key Ingredients and Preparation | Taste of Home

Mezcal vs. Tequila: What’s the Difference?