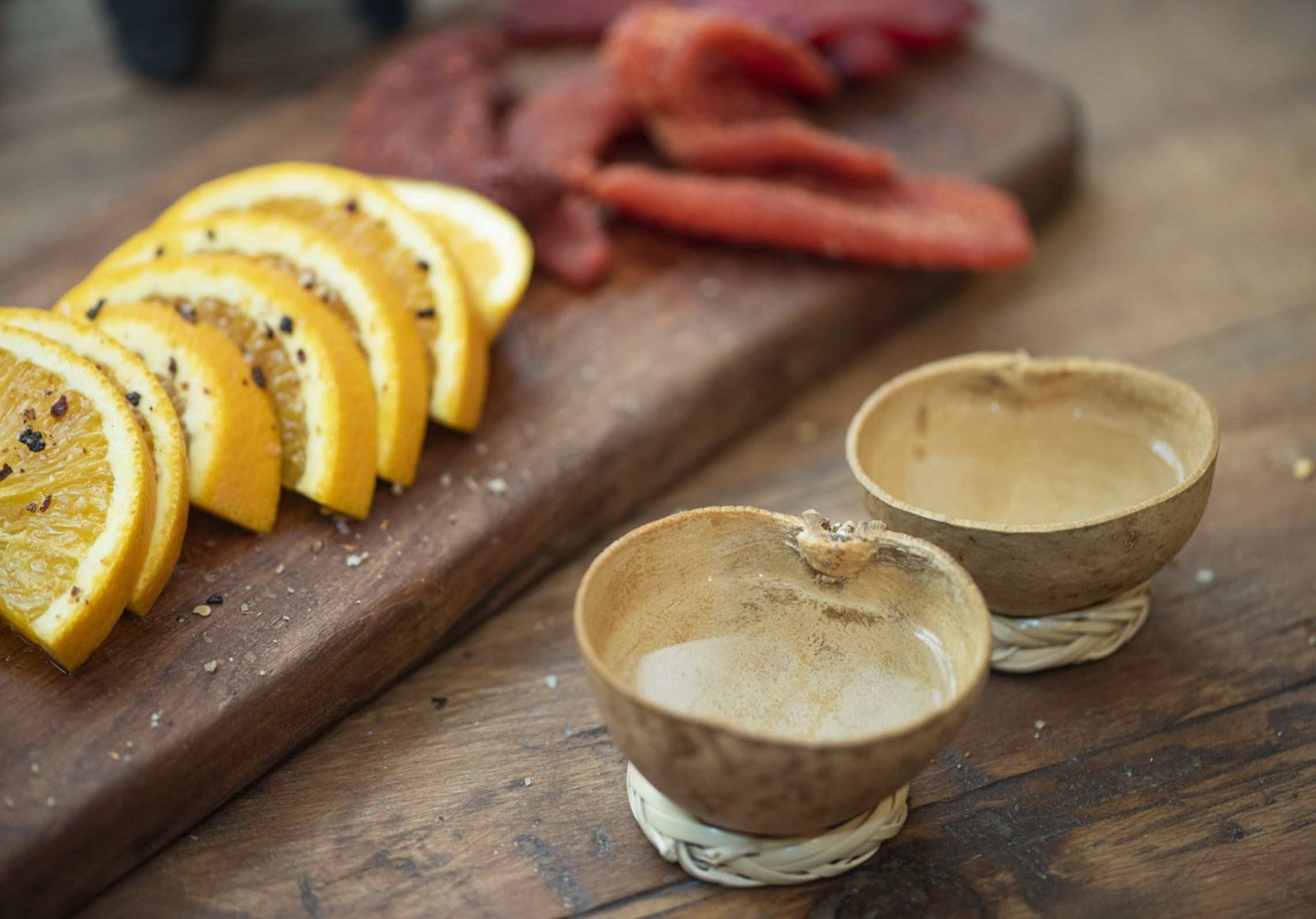 Hold on; you haven’t tried Mezcal yet?!

Mezcal is essentially the definition of “up and coming” these days—and it’s about time you got on board. Whether it’s because of the large millennial consumer base or the increasing demand for premium beverages, one thing’s for sure: Mezcal is making moves. To be fair, Mezcal isn’t like wine or beer. It probably wasn’t the first thing you considered for your first legal drink and likely wasn’t something you’d regularly find at high school house parties, so it’s understandable that it might seem unfamiliar. Luckily, that’s all about to change.

Perhaps we should rewind a few steps for a proper introduction. “Hey, what exactly is Mezcal?” We’re so glad you asked.

Mezcal, pronounced meh-skal, gets its name from Nahuatl mexcalli (an important indigenous language of Mexico), which means “oven-cooked agave.” Mezcal is a distilled spirit made from the heart of the agave plant, something called the piña. And no, Mezcal isn’t the same as tequila.

Given you haven’t tasted Mezcal before, we’re going to assume minimal background knowledge and give you a quick rundown on the whole Mezcal vs. tequila situation. They’re not the same thing, but technically, any spirit made from agave is a type of Mezcal, which makes tequila a type of Mezcal. But they’re still very distinct, with three significant differences: the agave they’re made from, where they’re made, and how they’re made.

The agave they’re made from? There are over 200 species of agave, 30 of which can be used to make Mezcal, and one of which can be used to make tequila. Where they’re made? They’re produced in different areas of Mexico. Like wine and champagne, the difference comes down to geography because different terroirs create nuances in the agave flavor. How they’re made? The tequila production process cooks agave above ground in industrial ovens, while Mezcal uses underground fire pits filled with leaves and stones.

We could go on and on, but you get the gist. Mezcal is something special.

There’s More to It than Smoke

Mezcal does an impressive job of packing in multiple layers of “wow” factor, considering it only has three ingredients (at least, it does when you get Mezcal Rosaluna). The element of smoke is by far the most popular and perhaps the star of the show, but like most things in life, it takes a village. There’s more to Mezcal than just smoke—but, the smokiness is undoubtedly rad, so we’re still going to tell you all about it.

Have you ever wondered why Mezcal is so smoky?

Mezcal gets its signature smokiness during the production process. Remember how “Mezcal” comes from words that mean “oven-cooked agave?” This refers to the roasting process, which is step number two in the journey of Mezcal Rosaluna.

Once we harvest the agave from our backyard family farm, it’s time to start making our oven. We start a fire with pinewood logs in the ground, cover it with stones and tightly packed dirt, and carefully pile on the agaves. The earth is our little helper, consistently getting our agaves to the perfect heating point to generate constant and uniform roasting. It's quite the art (if we do say so ourselves).

This true artesanal method requires more diligence and patience, but this extra TLC helps us strike the perfect balance between smokiness and cooked agave. Roasting takes up to five whole days, but this distinct smokiness or “charred” essence is our signature, and it's so worth the wait.

Wake Up and Smell the Roses (Or Floral Notes)

Mezcal carries its floral notes subtly, between its fruity and charred counterparts.

The floral element of Mezcal is largely tied to the type of agave the Mezcal was made with. Agave carries with it the characteristics of the terroir it is grown in, just like wine varietals. The notion of “terroir” is probably one of the most used, yet, somehow still least understood. The French word “terroir” roughly translates to “sense of place,” which is actually a pretty good definition. Some significant traits that make up terroir are climate, sunlight, soil, and terrain.

Agave from different regions will bring a unique flavor profile, distinct only to the environment it was grown in. The soil, how the agaves were cared for, and the distillation process will also affect the final flavor. For example, arroqueño agave is a rare species known to produce particularly floral Mezcals, with prominent “green” notes.

If you enjoy liquors with elderflower or rose essences, there’s a good chance you’ll enjoy the floral element of Mezcal, too.

Mezcal is everything you want it to be, all the time. Summer is right around the corner, but don’t you worry—Mezcal’s bright notes are ready for warmer weather.

The citrus flavors of Mezcal make this spirit a top-grade choice for cocktails. Having citrus notes automatically makes anything a top choice for a cocktail, right? Take our Pink Moon Paloma, for example. Our twist on the Paloma uses Mezcal Rosaluna, fresh grapefruit juice, and lime (with some garnishes too, of course). It’s a delicious and fruity explosion of flavor, delivered in a sophisticated way. Just the way we like it.

She’s So Down to Earth

The third flavor profile you can expect is in the realm of everything earthy, minerally, and vegetal.

A good Mezcal tastes so down to earth because any good Mezcal had to have been made using artesanal methods. Traditional artesanal methods utilize underground pit ovens for roasting the agave. For comparison, industrial-grade Mezcal is typically produced using stainless steel tanks above ground, making it more of a steaming process than a roasting one.

The Complex Magic of Mezcal

So now the question is: How does one find the best Mezcal?

What sets a great Mezcal apart has a lot to do with the specific terroir, or the environment in which it is cultivated. Like wine and champagne, little differences (that add up to make all the difference) in Mezcals come down to geography. A whopping 90% of the world’s Mezcal supply comes from Oaxaca (Rosaluna included), and different regions affect the final product.

Mezcal Rosaluna is made in the beautiful rolling hills of Oaxaca, in the town of Santiago Matatlán. Oaxaca is lovingly referred to as “The Capital of Mezcal,” and for a good reason: it produces the best Mezcal. Mezcal labels should have a NOM number on the label, identifying the distillery where the specific spirit was produced. Curious about the bottle you’re holding in your hand at the store? A quick Google search should do the trick.

When choosing the right Mezcal, a “Made in Mexico” label should be your first criteria.

Mezcal is regulated and must be made with 100% agave. For comparison, Mezcal’s cousin, tequila, can be mixed with up to 49% alcohols derived from other ingredients.

Should it be aged? Different Mezcals are aged for anywhere between a few days to several years. Resposado is aged for longer than two months but less than a year. Añejo is aged one to three years. Extra-Añejo is aged for longer than a year, maxing out at around ten years. That said, unlike many other kinds of alcohol, an aged version may not be your best option here, because a fresh, new Mezcal is the only one that will allow you to really taste the intricacies of flavor before they break down.

Mezcal isn’t like other liquors. She deserves special attention and appreciation. We’ll always hype up all of our Mezcal friends, but if we’re being totally honest, Mezcal Rosaluna is definitely the real MVP. There’s something about its long history and true simplicity that just feels right. Agave, water, and lots of love. That’s all you really need.

why is mezcal smoky | Mezcal PhD

Mezcal Regions—Where in Mexico Does Mezcal Come from?